Childhood Assault Must Be Made Illegal 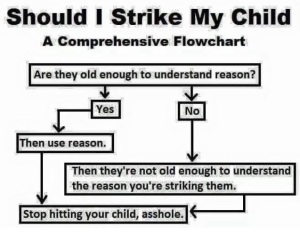 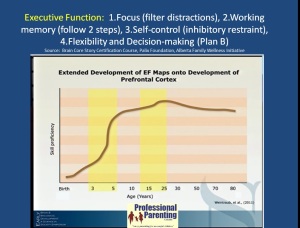 It is an election year, and Prime Minister Trudeau promised to implement the Truth and Reconciliation Commission Report recommendations.  One of those recommendation’s is to remove the legality of children being assaulted.  Ask the MP candidates what they are doing in this area to protect children who have very little self-control (normal young childhood executive function) and risk being hit because of adult’s poor understanding of normal brain development. “He should know better!” is a common statement from parents and caregivers that is created from years of myth, bias, and lack of brain capability knowledge that has been passed on from previous generations. As you can see from the above chart, by the time children are old enough to understand “consequences”, about age 6, they are old enough to problem-solve situations without being hit. They have enough self-control to not “do the deed” and really do begin to “know better.” No one would assault a child in a wheelchair for not being able to ascend a staircase, yet, we do it all the time for young children incapable of self-control.

For more help on the difference between punishment and discipline/gentle guidance, read “Discipline Without Distress.” It was written with 5 kids (3 spirited ones) in mind!

All the above books have up-to-date charts on child capabilities and brain development.

Check out the video help at http://professionalparenting.ca/press-media.php

Here is some information of Repeal 43, written by my friend and passionate advocate of non-spanking discipline, Kathy Lynn.

Section 43 of the Criminal Code of Canada

Every schoolteacher, parent or person standing in the place of a parent is justified in using force by way of correction toward a pupil or child, as the case may be, who is under his care, if the force does not exceed what is reasonable under the circumstances.  R.S.C., 1985, c .C-4

This is the wording in the criminal code but

The constitutionality of Section 43 was challenged in the Ontario Superior Court of Justice: then by way of appeal in the Ontario Court of Appeal and the Supreme Court of Canada. The Section appears verbatim as it did prior to the Supreme Court of Canada’s decision. However, the Court narrowed the scope of defense to assault under section 43 of the Criminal Code of Canada and to set out a series of judicial limitations to assist in the interpretation of the justifiable or so-called “reasonable” limits of corporal punishment. The  judicial limitations (which again don’t appear in the Criminal Code of Canada) are as follows:

1)    Only parents may use reasonable force solely for purposes of correction;

2)    Teachers may use reasonable force only to “remove a child from a classroom or secure compliance with instructions, but not merely as corporal punishment”;

3)    Corporal punishment cannot be administered to “children under two or teenagers”;

4)    The use of force on children of any age “incapable of learning from [it] because of disability or some other contextual factor” is not protected;

5)    “Discipline by the use of objects or blows or slaps to the head is unreasonable”;

6)    “Degrading, inhuman or harmful conduct is not protected”, including conduct that “raises a reasonable prospect of harm”;

7)    Only “minor corrective force of a transitory and trifling nature” may be used;

8)    The physical punishment must be “corrective, which rules out conduct stemming from the caregiver’s frustration, loss of temper or abusive personality”;

9)    “The gravity of the precipitating event is not relevant”; and

Violence against children should be against the law, not defined by it.

Decades ago, it wasn’t a criminal assault to physically beat

In today’s Canada, only children are still on that list.

That’s just wrong.  And it’s not who Canadians are.

This is not a child discipline issue. It’s a human rights issue.  All Canadians, whatever their age, deserve the protection of law against violence in any form.

The Government has promised to implement the Truth and Reconciliation Commission calls to action.

Call to action #6 calls for the Repeal of S43 of the Criminal Code of Canada. Of the many calls to action this is one that is simple to implement and will protect all of Canada’s children.

United Nations on the Rights of the Child

The focus for this initiative has been on foreign policy.

But there is another issue that the Liberal Government could easily address.

On December 13, 1991, Canada formally ratified the UN Convention on the Rights of the Child. The Convention, which is a comprehensive statement on children’ rights, covers every aspect of a child’s life.

The presence of S43 in our Criminal Code is in direct conflict with the UN Convention. It seems to us, at Corinne’s Quest that our government should repeal S43 and come into compliance with the United Nations.

All that being said, it is 2019 and the culture in Canada is that of non-violence. Bullying is not acceptable in any cases and we say that domestic violence is also not accepted. However, children are not covered when we talk about domestic violence and they can, under certain circumstances, be legally assaulted.

To have a section (S43) of our criminal code which accepts, and in some cases, encourages physical punishment of children is appalling.

It is a question human (children’s) rights and when the simple act of Repeal can protect children from this violence and its unintended risks it should be done.

This site uses Akismet to reduce spam. Learn how your comment data is processed.